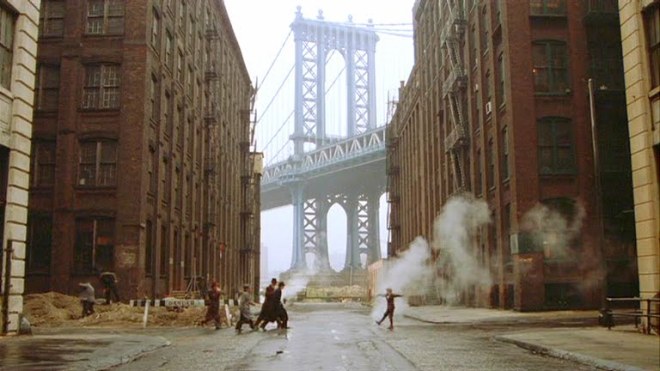 Today’s Frame of Preference comes from Sergio Leone’s often overlooked, sprawling, gangster epic Once Upon a Time in America (1984). The movie follows the tumultuous life of a Prohibition-era gangster played by Robert De Niro, and showcases some of Leone’s most brilliant shots, including this one. This look at the Brooklyn Bridge towering over a dilapidated street communicates perfectly the beauty and the gravity of the film.

First off, since this is the inaugural installment of “Silver Screen, Silver Tongue,” let me explain the purpose behind this column. I came up with this format as a way of marrying my love of film and my love of esoteric vocabulary, and also as a solution to what I saw as a problem with traditional movie reviews. Evaluating a film quantitatively, be that with star ratings, percentages, or what have you, is inherently flawed. Art is vague, and a review is supposed to convey the feelings of the reviewer, an equally vague entity. So, rather than try and condense my opinions to a number, I’m going to condense them to a third, vague entity: a word. And maybe, just maybe, in the swampy muck of layered vagueness, something genuine will manage to surface.

That all being said, let’s move on to the topic at hand: Ferris Bueller’s Day Off, John Hughes’s 80s classic about skipping school and sticking it to the man. A testament to the fun that can be had when you forget the rules, steal a bithcin’ car, and cruise around Chicago for an afternoon. Our protagonist, Ferris Bueller (Broderick), convinces his best friend, Cameron Frye (Ruck), to “borrow” his father’s Corvette and take Bueller and his girlfriend, Sloane (Sara), for an eventful jaunt around the city. This includes catching a baseball game, posing as upper-class snobs at a fancy French restaurant, visiting an art museum, and hijacking some kind of German parade, all the while avoiding Principal Ed Rooney (Jones)’s ire. It’s a truant’s fantasy: a fun, lighthearted look at a world without consequence, where the parents and the principals have no power and the kids are calling the shots.

It’s the kind of happy-go-lucky movie that I thought would be a perfect start to this new column: nostalgic and silly, perfect 80s fluff. Upon re-watching, though, I’ve come away with a much different view of this film. It’s dark, and I found parts of it quietly unsettling. I mean, strip away all the facile 80s junk and look at the people that make up this world: Cameron is clearly mentally unstable, suffering from serious family problems that the movie more or less glosses over; Rooney is a sadistic maniac who would risk life and limb to bring one kid back to school on some sick vendetta; and Ferris himself displays a terrifying amount of disrespect for authority, as well as ingenuity when it comes to skirting it. The kid is a super villain in the making. Hell, he put more effort into all of his precautionary measures than he would have into a single day of school. I’m not trying to be a wet blanket, but this movie really is unsettling when you sit and think about it.

Now, I’m not the first person to furrow his brow at Ferris Bueller’s Day Off. The Cracked video series After Hours brings it up in their episode “5 Classic Movie High Schools That Would Suck to Attend,” as does a Nerve article entitled “Five Beloved Yet Deeply Disturbing Coming-of-Age Films.” Both discuss Ferris’s disturbingly sociopathic rule-bending, noting it as something which makes the world of the movie unsettling. On top of that, there’s a fan theory (which I won’t delve into too deeply here) which states that Ferris is simply a figment of Cameron’s imagination, a diametrically-opposed alter-ego that Cameron concocts for himself Fight Club-style, since he’s too much of a pushover to actually do what he wants.

Let’s assume for the sake of argument that Ferris is a real person who is really skipping school for the ninth time this semester, who is really convincing his friend to take a joyride in a priceless car, who is really running the greater Chicago area with a boyish smirk and a garish vest. Ferris Bueller’s Day Off creates a world bereft of authority, where the only thing that advances your station is deception. This is Ferris’s movie because he is a master of it. He’s thought of every scenario, dancing circles around Rooney at every turn.  Liars in this world don’t face consequences. Ferris, of course, but don’t forget the valet driver who takes the car for a spin without anyone noticing. And every character who tries to stand for truth and authority is punished for it. Rooney is torn apart by a dog and forced to hop on a school bus to get home. Ferris’s sister, who calls in to the police station with a legitimate trespassing complaint, is suspected of prank calling and is going to be punished by her parents. Sure, she meets a dashing young cokehead, but that cokehead is Charlie Sheen, so we’ll call that one a wash. Cameron, who serves as the voice of reason throughout this film, destroys his father’s car and gets to cruising for a nuclear ass-bruising. Every pillar of honesty and virtue is toppled and stomped on by movie’s end.

But, pernicious? I can see you rolling your eyes, it’s fine. All I’m saying is that this movie turns modern Chicagoland into a postapocalyptic wasteland, ruled by deception and demagoguery, then slaps on some eyeshadow and calls it an 80s high school classic. Don’t get me wrong, I love this movie. The acting is decent, the directing is solid, and the jokes that are present are rather funny. Go ahead, watch this film, enjoy it. But just try and watch this clip from Ferris’s opening monologue, with everything I’ve said in mind, and not walk away agreeing that Ferris Bueller’s Day Off is pernicious.